Virunga National Park in Congo is home to over 200 mountain Gorillas living in the high mountains. As of 2016, the park had about 8 Gorilla families that were habituated and are available for tracking. The population of the Gorillas in Congo is very uncertain due to the endless instability in this country. The long history of instability in the DRC has been a great challenge but was stopped in 2012 and tourism activities resumed including tracking of the mountain Gorillas in Virunga National Park. Gorilla Families have been growing steadily and here is the list of the habituated mountain Gorilla groups in Congo.

This Gorilla group is composed of 34 members under the leadership of a dominant silver back Kabirizi. The group was named after the ICCN director who passed on in the 1990’s in a disastrous accident. Kabirizi was a wild gorilla who took over from Ndungutse after he died in 1997 in the wars between Rwanda and Congo. The current leadership of the group is also being threatened by a young Silverback called Masibo.

Bageni Gorilla group derive their name from the dominant silverback and their leader Bageni who split from Kabirizi group. The family is made of 26 members and this makes it the largest group in Virunga National Park. Being a big group, Bageni faces threats from the grown males and there’s a prediction that the group may split in the near future. This gorilla family is located in Bukima and Gatovu sectors of the park. 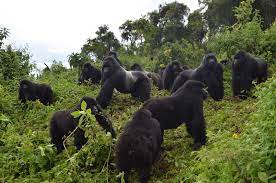 Muyanga Gorilla group is made up of 7 members under the leadership of Gasore the dominat male. This is one of the latest Gorilla families to be discovered in 2008 consisting of Bilali as the dominant female. Travelers find this group very interesting especially to go and see twins and the bald silverback in the group. Muyanga is located in the Bukima sector of the park.

Rugendo is one of the oldest Gorilla groups to be habituated in 1989. It was named after the great leader Rugendo who died in 2001 due to the instability in the DRC. The Family is now led by Bukima and is made of 9 members. The number of the members was bigger until Rugendo fought his son Humba (leader of Humba group now) and left with 10 gorillas from his father’s group. Rugendo was left with few members but he’s known for producing mighty silverbacks now leading their own groups.

This group gets its name from the dominant male Humba the ambitious silverback who split with his father Rugendo in 1998 to form his own group of 10 members. The group was bigger until 2014 when Nyakamwe (Humba’s brother) split and left with 6 members to start his own life also. The group is found in Bukima near Goma area and is one of the travelers’ favorite families.

Mapuwa group go its name from a dominat silverback mapuwa who separated with his father Rugendo in 1998. It is located at Jomba near Bunagana at Uganda’s border with Congo. The group is currently under the leadership of Mvuyekure who overthrew Mapuwa and the group now has 22 members. The big number of the gorillas in this group is sue to frequent births that have seen the numbers grow very fast. Mapuwa and his brother Humba left their father Rugendo in 1998 and formed their own groups.

Nyakamwe group got its name from the dominant male and their current leader Nyakamwe. It was formed following fights between Nyaakamwe and Humnba the leader of Humba group in 2014. This group consists of 11 members and their habituation happened in the same period with Bageni Gorilla family. Nyakamwe resides in the Bukima area of Virunga National Park.

This group has great history especially relating to the memory of the Park Director who passed on due to a landmine that struck him. Lulengo the dominant silverback is the leader of the group after taking over from his father Rugabo who was killed by poachers. The group was formerly known as Musekura but was later named after Lulengo the dominant silverback. The group has 9 members and can be seen at Jomba side of the Virunga Park at border with Uganda.
Lets Go Tours Rwanda offers customized Congo gorilla tours to trek one of the 8 habituated families and explore the beauty of Virunga National Park at affordable rates.