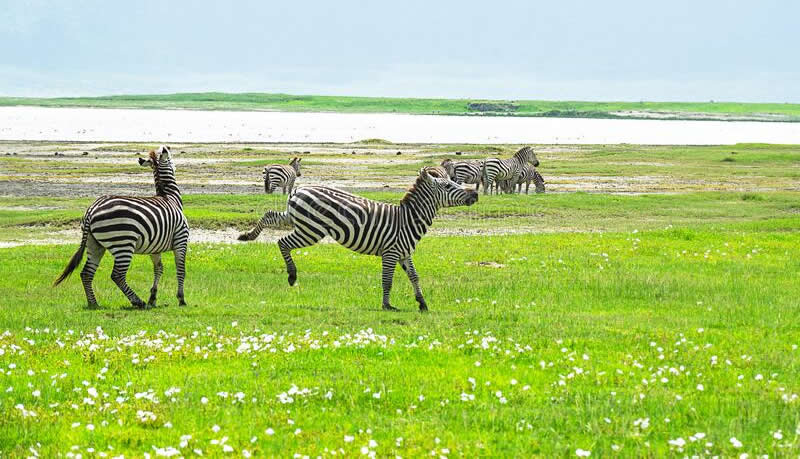 History of Ngorongoro Conservation Area
Ngorongoro Conservation Area officially received its Protected Area status 1959 as a multiple land use area whereby wildlife peacefully co-existed with the Masai pastoralists. It was named by Masai pastoralists after the “Ngoro Ngoro” cowbell sound but became a UNESCO World Heritage Site since 1979. The Ngorongoro Wildlife Conservation Act of 2009 imposed new restrictions on settlement as well as subsistence agriculture within the Crater area thus displacing the pastoralists, yet most of them had been relocated to the Protected Area from their original lands to the northern sides of Tanzania after the British Colonial Government gazetted Serengeti Park in 1959. 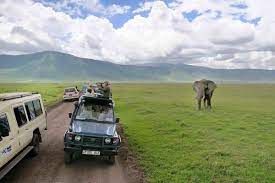 Other attractions
Aside the wildlife and bird species in Ngorongoro Conservation Area, travellers have a chance of seeing historical and cultural sites that are second to none. With tours of this safari destination, popular archeological sites like Olduvai Gorge and Laetolil are also explored. Travellers can see the hominin fossil remains that date back to 2.1 million and 3.6 million years ago.
Also within or close to Ngorongoro Conservation Area are the spectacular Lakes Ndutu and Maseke, Lake Magadi, Goi Mountains, Empakai Crater, Olkarien Gorge, the shifting sands of Ngorongoro, Ngoitokitok Springs, Olmoti Crater, Nasera Rock, Lerai Forest, Rumbe Hills, Mandusi and Gorigor swamps and many others.
Visitor experience within Ngorongoro Conservation Area

Watching the Great annual migration
The Great annual wildebeest migration is one of the Earth’s most phenomenal spectacles and undeniably one of the top tourist experiences for travellers to Tanzania’s Northern Province. Each year, over 2 million wildebeests, Zebras and Gazelles make a grand journey from Serengeti (large scale) and Ngorongoro Conservation Area (miniature) to the savannah plains of southern Kenya (Masai Mara National Reserve). 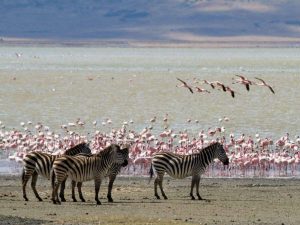 If you have dreams of experiencing what Tanzania birding tours are all about, you ought to book a bird watching experience in Ngorongoro Conservation Area where over 500 species have been recorded. The different ecosystems of Lakes, forests, savannah grassland, woodlands, River, the Crater floor and wetlands are all natural habitats for different bird species that include Grey-crowned cranes, yellow-billed storks, superb starling, Raptors, saddle-billed storks, secretary birds, Bronze starlings, Kori bustards, Verreaux’s eagles, lesser and greater flamingos, Ostriches, to mention but a few. While birding tours are offered throughout the year, the rainy season is considered the most ideal time for watching many avifauna species as flowers are booming and these creatures are breeding with many migrant species.

Wildlife Photography
Are you a professional or simply leisurely photographer? It would interest you to know that Ngorongoro Conservation Area is one of the unmissable spots in the African Continent. Its varying landscapes as well as wildlife and bird diversity has made it many travellers’ favorite and must-visit safari destination.

Guided bush walks
There are many places offering quality guided bush walks around the African Continent but there’s nothing like the ones in Ngorongoro Conservation Area. Thanks to its exceptional landscape that makes it adventurous yet very rewarding to undertake these guided walks. Are you the adventurous or laid-back type? Still areas like the floor of the Great Rift Valley, Olkarien Gorge, Empakai Craters, the forest galleries, Nasera Rock, the spectacular Ngorongoro Crater and Olmoti Volcano can never disappoint you.
A wide array of bird species that include lesser and greater flamingos, mountain buzzard, African fish eagles, crowned eagles, Verreaux’s eagles, Namaqua doves and secretary birds are unmissable during these adventures but also be prepared for see Defassa waterbucks, African leopards, common elands, Black rhinoceros, Masai giraffes, Cape buffaloes, Hippos, impalas, lions, leopards, warthogs and cheetahs among others are common.

Community visits
For a taste or rare glimpse into the traditional Masai pastoralist lifestyle, there is undeniably no better place to go other than the surroundings of Ngorongoro Conservation Area. They involve guided walks by Masai warriors dressed in traditional attire taking tourists to their traditional villages to learn about their riveting culture, interesting traditional dances, mouth-watering dishes, traditional dressing (Shuka) as well as making their local art and crafts objects or even purchasing them as souvenirs. What will surprise you is how the Masai have maintained their culture regardless of Tanzania’s influence of modernity.
Ideal time of the year to experience Ngorongoro Conservation Area
The best time of the year to experience Ngorongoro Conservation Area largely depends on personal interests and budget, but generally, the Protected Area is open all year round. However, majority of the tours to this safari destination are undertaken in the dry season, from June through October and December to February. These warmer months bring an average temperature of 19˚C while the drier conditions, fewer remaining watering sources and shorter grasses provide better visibility for game drives.
The wet season-March to May and November are the most ideal for experiencing fewer crowds but travellers have to be prepared for game drives via muddy and slippery game tracks in addition to having obstructed wildlife visibility resulting from the taller grasses.